If you're not familiar, Lushsux, is some garbage ass Twitter artist who's been using Palestine as a canvas for his handle & career.

You can catch up on that here, especially from those Palestinians offering insight in the comments.

In short, he is using western celebrities and "humor" in English only all over the wall. There are multiple large scale "murals", erasing nearly all Palestinian presence in the process and relegating what is left to an auxiliary appearance. There's also some low-key antisemitism.

To offer some context here, this is about Fantasy Occupation and the entitlement many westerners have when coming here.

"Palestine is not a drawing board" for your career, nor for other people's entertainment. It is not an "illegal border wall, Rick". It's fucking Apartheid. Your "art" is not a commodity here. Go away. It's not OK to do this. 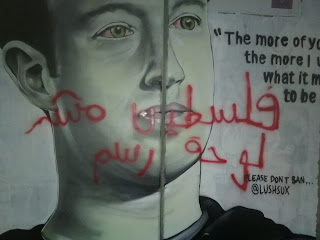 But there's a story that goes with this as well, reflective of the same issues regarding entitlement.

Not 30 seconds into doing this, my first interaction is with an older white American woman driving by shouting in an unabashedly mid-western accent "What are you doooiiinnnggg???". I'm not in the mood to accommodate her, so just I give her the finger. She shouts "NO, THAT'S WHAT YOU ARE!" and drives a few meters on, parks, and begins taking pictures of these images. I can hear her complaining to someone else about the audacity of doing this.

An older Palestinian man (we'll call him Issa) comes over and inquires what I'm doing. With my broken Arabic I attempt to communicate why I'm doing this and who I've been talking too about it. He calls his friend over who clearly knows a bit more English. (We'll call guy #2 Yusef)

As I'm talking to them I realize, a lot of folks think this is the work of Banksy. My friend said that to me the other day, as well. I make it clear it is not.

While I'm explaining who this "artist" actually is, the old white lady finally comes over and starts bein' a liberal upset I'm writing over "Mandela's" face. I say this because I don't think she actually realized its Morgan Freeman's face next to a Mandela quote. She starts speaking loudly AT the 2 Palestinian men completely in English.

She starts talking about "vandalism", asking what I'm doing here, questioning my accent- she's confused. She doesn't know how to approach this. Then she says, 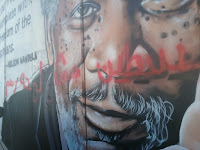 I did not let her finish.

"OH, THE POOR TOURIST!" I pointed to what I had just wrote and say "Mish tafhim" (You don't understand). She doesn't. She throws her hands up and can't say shit because she has no idea what this means, so I tell her to "fuck off." Yusef doesn't like me talkin' like that to anyone. He, very un-aggressively, says he'll call the police if I keep speaking like that. Then the first guy (Issa) explains to (Yousef) more clearly what I'm doing and...and the dude, who just said he was going to call the police on me, turned around and...apologized to me. I was floored.

At some point during this interaction, loud white lady whom is standing next to us unable to understand the conversation flashes her "Palestine Press Pass". They are not impressed. At all. She leaves.

I spend a few moments talking to them, getting their names, shake hands, and then make my way onward. They are very kind.

The larger relevance of this story is that it's the same nonsense that makes someone think they should draw these images: Entitlement of their own expectations over actual Palestinians. At no time did the idea of Palestinians being de-prioritized over memes ever occur to the woman I argued with or to this fascist graffiti artist. They just don't factor in beyond a collective object that they claim they're supporting.
at October 18, 2017

Lush knows it's not an Israeli doing this. But he uses anti-Israeli sentiment as a means to maintain his antisemitism and the support...